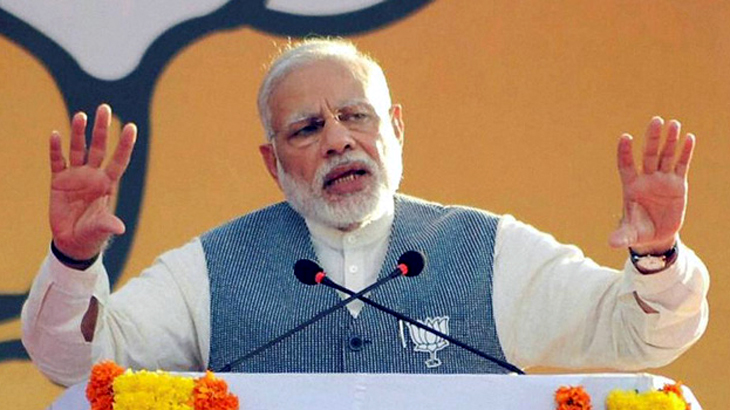 New Delhi, 22 Feb 2017 : Prime Minister Narendra Modi said on Wednesday that law universities should have talent that takes into account fast-paced technological changes and works towards laws that can stand the test of time.

Addressing a gathering at the Rashtrapati Bhavan here after releasing a book — “Judicial Reforms – Recent Global Trends” — and presenting the first copy to President Pranab Mukherjee, Modi said that technology is bringing about massive changes, which is making laws obsolete.

The book has been brought out by the India International Law Foundation and is based on a seminar on the topic “Recent Trends in Judicial Reforms: A Global Perspective”, held here in January 2013.

Citing the example of radio, Modi said that a person was required to have licence to own a radio set earlier, but now one could listen to radio stations from across the world on a cell phone.

He said there could be flying cars after 15-20 years and this would make some laws relating to road transport irrelevant.

Framing laws that are also futuristic in approach is a challenge, he added.

“Our law universities should have that kind of talent to look at all the issues at hand and then work,” he said.

Chief Justice of India J.S. Khehar was also present at the event.

The Prime Minister said India needs to bring about faster changes to have its voice heard in the changing global order. The country has a golden opportunity to fill the vacuum due to latest changes in the global scenario, he added.

“After the Second World War, the world had become bipolar. But we have become inter-dependent now. If 10 issues are contested, there is consensus on six. India can’t remain oblivious of such situations.

“Our aim should not be only to hold up in the changing global order but also have our voice. And it will happen when we will become powerful and our policies, rules, behaviour will be in accordance with the expectations of the world. So, we will have to bring about faster changes to overcome the challenges,” Modi said

He said it would have been good if Justice Khehar had continued to hold the position for some more time (beyond his tenure) since he takes speedy decisions.

Saying it is happy experience for him to work with Khehar, Modi said: “I enjoy running along with him.”

He said the media has stopped asking him questions about economic reforms after the demonetisation decision was taken.

“After I became the Prime Minister, mike-holders (journalists) would ask me about economic reforms. But they have stopped discussing it after November 8,” he said.