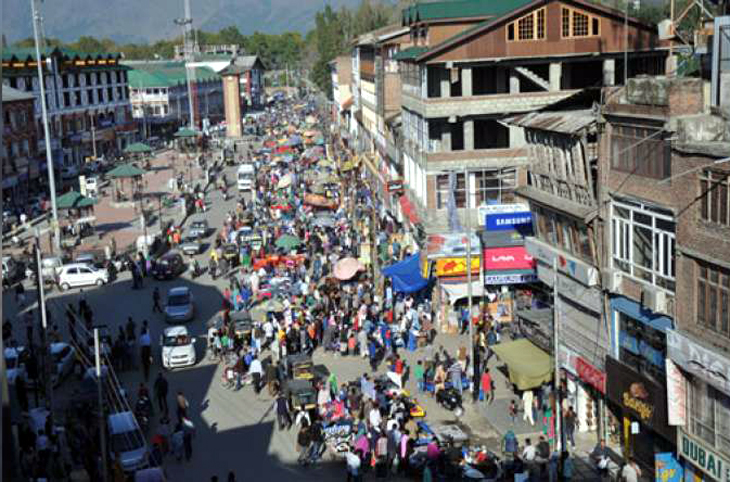 Srinagar, 19 Nov 2016 : After 132 days of closure, the Kashmir Valley burst into life on Saturday morning with a large number of vehicles out on the roads, and markets, schools, offices and businesses open for the first time after months of separatist-sponsored shutdown and violent protests.

Shoppers thronged Srinagar markets in large numbers even as demonetisation inconvenienced people in the Kashmir Valley where the November 8 surprise announcement had had little or no effect because businesses and other activities were closed since mid-July.

Many buses and other public vehicles started plying early in the morning as people came out to attend their offices, open their shops and visit banks to withdraw cash.

Separatist leaders, who had been spearheading the agitation with their weekly protest calendars, relaxed the shutdown for two days, asking people to resume normal activities over the weekend.

Authorities also did not impose restrictions anywhere on Saturday to facilitate free movement of people and traffic.

Many places in Srinagar and other district headquarters in the valley witnessed traffic jams as people came out in large numbers to go about their daily chores or simply to have a feel of normalcy.

Muhammad Maqbool, 42, an electronics appliance store owner in Lal Chowk, is just happy to be at his shop during normal working hours, hoping to stay open till midnight.

“I don’t want to talk about my losses because that nobody is going to make good for me. Yet, the feeling that I have opened my shop first time during day hours after so long is great,” Maqbool.

He said he had briefly opened his store earlier when separatists announced evening relaxations. “Today is different. Everything is just normal.”

Some distance away, Ramzan Sheikh, 54, a shoeshine, said he made Rs 80 — his “first earning” after all these months of violence. “I had four customers. Each one of them gave me Rs 20 for polishing shoes.”

Asked if he worked during the evening relaxation period, Sheikh said: “Who would want a shoe shine when the entire city was closed and on the run?”

In north Kashmir’s Ganderbal district, Sooda Mir and his son Muzaffar had a tough time starting their mini bus after all these days.

“I had fixed a new battery in the vehicle before the trouble started here. I would also occasionally run the engine idle for some time during the ‘hartal’ to ensure that the battery did not run down. But, today the vehicle would just not start. I had to get a truck to pull-start my bus,” said Muzaffar.

Ironically, pavement vendors, wayside fruit sellers and roadside barbecue sellers have been better placed than other shopkeepers during the days of shutdown.

“We have continued somehow with our business for the last two months by risking our lives. But it is better to die earning bread for one’s family than seeing them starve to death,” said Abdul Hameed, 42, who sells beddings on a pedestrian mall here.

The stoic statement from Hameed is a terse reminder for those who believe life can be hostaged for too long either by the protest shutdowns or through curfews imposed by the authorities.

Officials said attendance in government offices, banks and post offices was almost full for the first time since the unrest, which left nearly 100 persons dead, started a day after Hizbul Mujahideen commander Burhan Wani was killed in a gunfight with security forces on July 8.