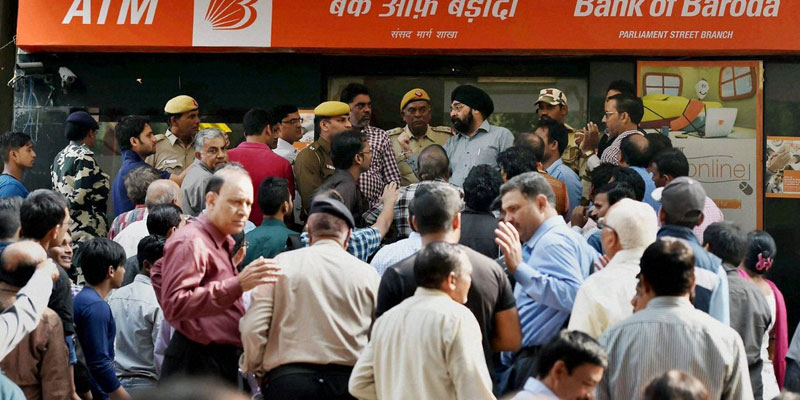 New Delhi, 13 Dec 2016 : Long queues outside banks in Delhi and the National Capital Region (NCR) were a common sight on Tuesday as they opened after a gap of three days.

The banks had been closed on second Saturday, Sunday and on Monday on account of Milad-un-Nabi.

As most of the banks hung “No Cash” boards within two-three hours of working, it was a great disappointment for those standing there for hours.

“Why there is no cash for people in the banks,” an agitated Sunny, who failed to withdraw cash after waiting in the line since 10 a.m, asked.

Pointing finger at bank personnel, he alleged: “They must be passing on money from the back door.”

The ICICI Bank at Connaught Place was one of the many banks in the city which stopped distributing cash after going “cashless” within hours of opening.

Disappointed, some people started questioning the very rationale of the demonetisation decision, saying they were also feeling that banks were colluding with businessmen to change money, leaving the banks “dry”.

People were also seen arguing with bank guards and other staff members after they were told that the cash was finished.

Security had to be beefed up at some banks to manage the crowd.

Similar scenes were seen outside most of the Delhi-NCR ATMs as well.

Meanwhile, National Organisation of Bank Workers’ Vice President Ashwani Rana said that all bank employees were not indulging in wrong-doing and were performing their duties sincerely and with honesty.

Referring to news reports about the alleged nexus between some bank officials and unscrupulous elements for changing the demonetised currencies, Rana said, “Don’t blame banks and all the 10 lakh bank employees and officers for the shameful act of just a few.”

“We also request the government to conduct an investigation so that the guilty could be exposed and punished,” Rana said.