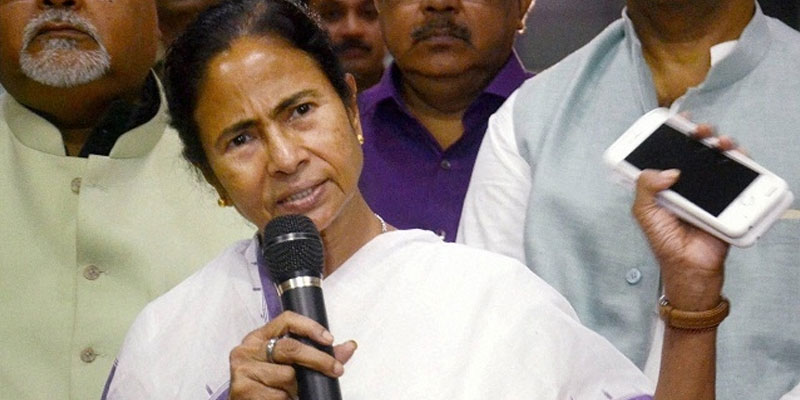 Terming the current situation in the country as “unacceptable”, Banerjee, also the Trinamool Congress chief, said the “national government” at the Centre could have another Bharatiya Janata Party (BJP) leader at its helm.

“Yesterday the President also voiced his concern about demonetisation. We welcome his statement. We appeal to the President to save the country from the mess.

“To save this country, let a national government be formed: Advaniji, Rajnathji or Jaitleyji can head it,” she said, referring to BJP leaders L.K. Advani, Rajnath Singh and Arun Jaitley.

She targeted Modi in particular for the adverse situation in the nation.

“All the institutions are under attack. This is a dangerous game. The PM is behaving like Kalidas, trying to cut the branch he is sitting on,” she said.

“‘He’ has to go,” Banerjee said, in an obvious reference to Modi. “President and Supreme Court have (a) role (to play).”

“It is time for President’s rule at the Centre,” she said.

Banerjee claimed a huge loss in terms of revenue due to the November 8 demonetisation and said a huge number of people in the state had been affected across various sectors because of the note ban.

“We have lost Rs 5,500 crore revenue due to demonetisation. 1.7 crore people in the state have been affected,” she said after an administrative review meeting at the Town Hall here, adding 81.5 lakh workers had lost their jobs in sectors like tea, jute, jewellery and beedi industry.

Comparing the centre’s governance with “terrorism”, Banerjee also criticised central government’s decision to dismantle the Planning Commission and dissolve the Board for Industrial and Financial Reconstruction (BIFR).

She said central government is “breaking the spine” of the country’s economy with these decisions.

“There is terrorism and hallabazi in the name of governance at the Centre. They even dismantled the Planning Commission and set up Niti Ayog with their own men who do not understand the country.”

“BIFR was constituted for reconstruction of industries and protection of workers. Sick industries registered in the Board could reconstruct their assets and run the company accordingly. Suddenly, the centre dissolved it,” she added.

India may again take ‘out of box’ action against Pakistan