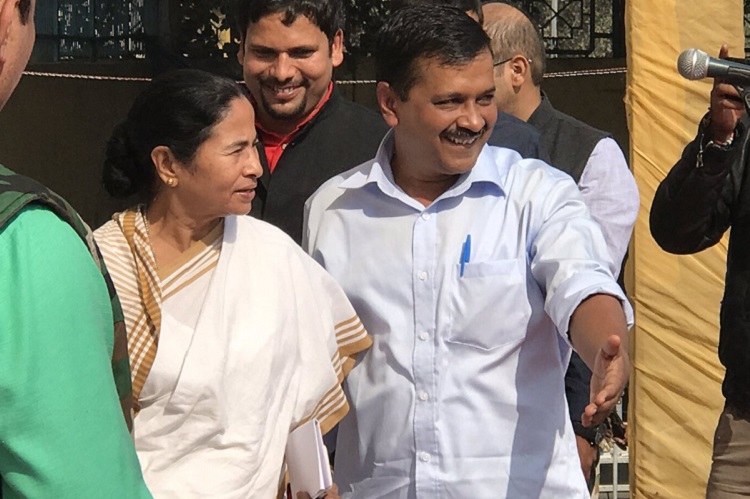 Addressing a public rally at the Azadpur fruit wholesale market in New Delhi, Kejriwal alleged a conspiracy behind Prime Minister Narendra Modi’s decision to spike Rs 500 and Rs 1,000 currency notes which led to a cash chaos across the country.

Calling the after-effects of the demonetisation a “crisis”, Kejriwal said people didn’t have cash even to meet basic needs.

“If this was indeed against corruption and black money, the first to support you would have been Arvind Kejriwal and the Aam Aadmi Party,” he said.

“Take back this decision in three days… Don’t test people’s patience. Otherwise, there will be a ‘bagaawat’ (revolt) by people.”

Reminding the audience that he had been an Income Tax commissioner, the Aam Aadmi Party leader said it was beyond his understanding how corruption and black money could be checked by introducing 2,000 rupee notes.

“This is the biggest scam of independent India,” He thundered.

He said banks had given out loans totalling Rs 8 lakh crore to corporate houses. This money, he alleged, had been siphoned off by the super rich or had been partly written off by banks.

“Nothing is left of the 8 lakh crore loan money… The demonetisation is a conspiracy,” Kejriwal added.

He said the government expected to net 10 lakh crore rupees by asking people to surrender the spiked currency and write off the bad debts.

Addressing the rally earlier, Banerjee said the government’s decision had led to economic instability in the country.

“What did they say? Achche din (good days) are coming. Is this achche din?” she asked, taking a jibe at Modi’s slogans that his government would bring in better times for India.

“Truckers tell me they don’t have money to pay drivers. Trucks are the lifeline of the nation. What will happen if trucks stop running and mandis stop getting vegetables and fruits? What will people eat? Diamonds? ATMs? What kind of a joke is this? There is no money for people to buy food, baby food, medicines? What will farmers do?” she asked, adding the situation was not this bad even during the 1975-77 Emergency period.

The Trinamool Congress chief said she supported the government’s move to curb black money but won’t let the mayhem continue in the name of fighting corruption.

“If in three days you dont withdraw, we will step up our protests.”

He said there was a time when he too thought that Modi was a honest man. He flashed what he said were Income Tax department’s documents to allege that two corporate houses paid some Rs 40 crore in bribe to Modi when he was the Gujarat Chief Minister.

He demanded that an investigation should be conducted into this.

Kejriwal also blamed the government for the reported deaths of 40 people in the country that have been linked to the dramatic announcement of November 8 that the high value currency would no more be legal tender.

“Who is responsible for these deaths?” he asked and the crowd roared: “Modi! Modi!”