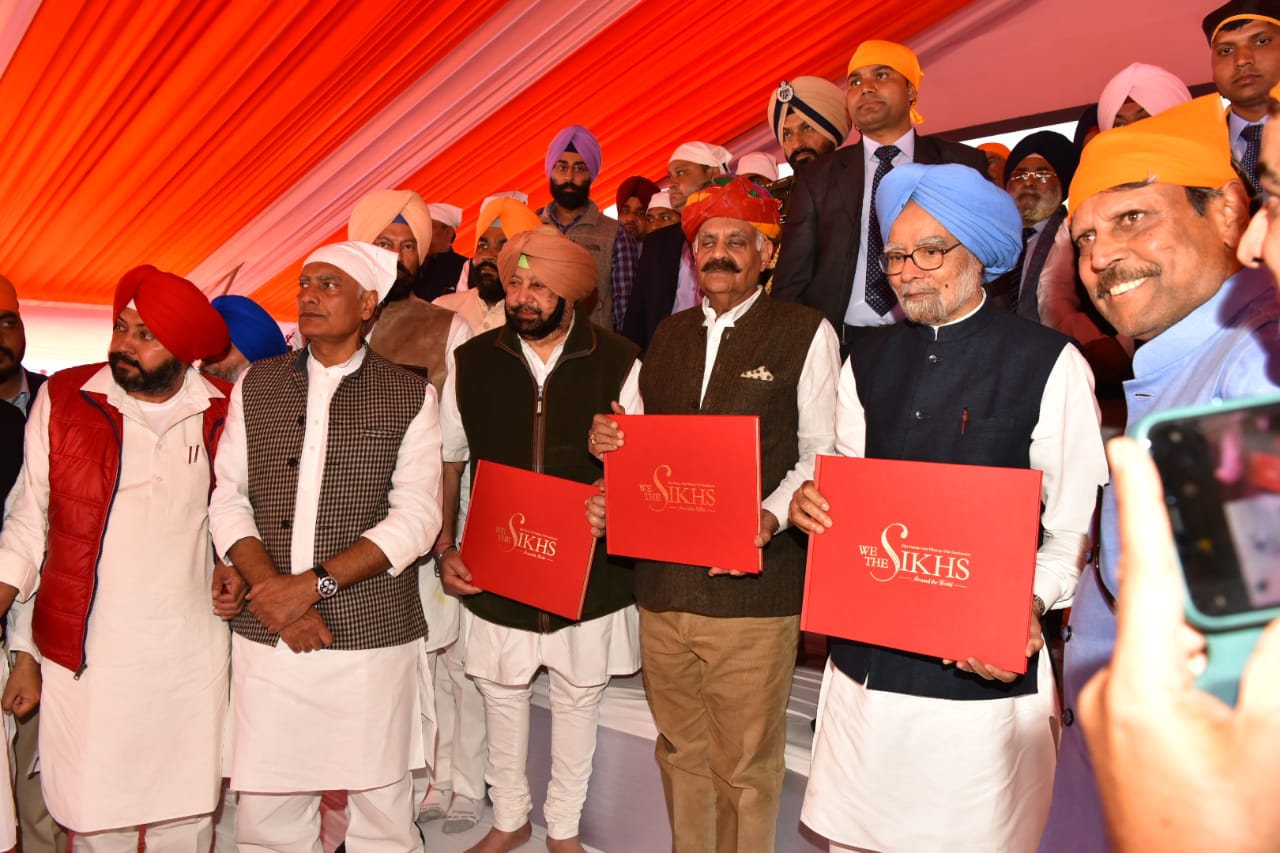 SULTANPUR LODHI, 23 NOVEMBER : Former Prime Minister Dr Manmohan Singh, Punjab Governor VP Singh Badnore and Chief Minister Captain Amarinder Singh on Friday laid the foundation stones for 26 development projects worth Rs 150 crore, including upgradation of infrastructure in the three historic towns of Sultanpur Lodhi, Dera Baba Nanak and Batala, to mark the launch of the year-long celebrations of the 550th anniversary of Sri Guru Nanak Dev ji.
Captain Amarinder, who further announced projects and welfare schemes to the tune of Rs 3312 crore to facilitate pilgrims and to commemorate the historic occasion, also launched a tree plantation drive to plant 550 trees in every village throughout the state in the next one year at a total cost of Rs. 10.5 crore. The cost shall be met through greening Punjab Mission and maintenance shall be done through MNREGA. Indigenous variety of trees shall be planted at appropriate places in consultation with Gram Panchayats, said the Chief Minister, appealing to all Punjabis to plant at least one fruit tree each in their homes.
The Chief Minister announced the release of 32 prisoners and remission of term for another 2952 to mark the occasion. The Government of Punjab has decided to set up a Committee under ACS (Home), with Principal Secretary (Jails), DG Intelligence & ADGP (Jails) as members, to review all cases of prisoners who have had good conduct and can be considered for early release. The Committee shall submit its report in 60 days. It is also proposed to build a Sri Guru Nanak Dev ji Marg, to be finalized by the Group of Experts
from Department of Religious Studies, which has been assigned the task to study and propose alignment for the same.
The foundation stones laid today relate to 3 High-Level bridges and 2 Foot Over Bridges (Rs. 24 crore), High Level bridge on creek of river Beas (Rs 13 crore), New Rest House at Sultanpur Lodhi (Rs. 5 crore), Widening of Plan Roads (Rs. 42 crores), Special Repair of Plan Roads (Rs 38 crores). All these works shall be completed by July 2019.
The others are development projects being undertaken by Department of Local Government for Upgradation of Civic Infrastructure in Municipal Council, New Bus Stand and Sewerage Treatment Plant (STP) & other sewerage works in Sultanpur Lodhi, besides Upgradation of Civic Infrastructure in Municipal Council in Batala & Dera Baba Nanak. All three towns are associated with the first Sikh Guru. The Chief Minister has also announced a Sarbat Sehat Bima Yojana, under which 43 Lakh families would be brought under insurance cover of Rs 5 Lakh at a cost of Rs 371 Crores, w.e.f January 1, 2019.
The State Government has also embarked upon an ambitious programme to spruce up the village infrastructure under Smart Village Campaign (SVC) in a phased manner, across the state, at a cost of Rs. 1000 crore in the first phase. Wide variety of developmental works (like sewerage system, paving of streets, gym, parks, CCTV, village Secretariat etc.) shall be taken up in these villages over the next 3.5 years.
The project’s aim, said the Chief Minister, is to make the villages self- sustaining by creating an environment to enable the local communities to achieve their capabilities through contextually appropriate technologies, systems, structures and processes. Besides, 36 villages and 11 Nagar Panchayats visited by Shri Guru Nanak Dev Ji have been identified for development at Rs. 150 crore, announced the Chief Minister.
An Institute of Inter-faith Studies will be set up at GNDU, Amritsar (Rs. 510 crore), while Pind Babe Nanak Da museum will be established at Sultanpur Lodhi to commemorate the historic occasion, said the Chief Minister.
Captain Amarinder also announced Bebe Nanki College for Girls in Village Mahablipur, 5 KM from Sultanpur Lodhi, in addition to a project for lining and cleaning of Kali Bein, to be undertaken in Sultanpur Lodhi in association with Sant Baba Balbir Singh Seechewal Ji of “Ek Onkar Charitable Trust” through Kar Seva.
A sum of Rs 180 crore has been allocated for upgradation of roads and bridges to improve connectivity to Sultanpur Lodhi with Majha, Doaba and Malwa areas, in order to cater to huge rush of Sangat expected to converge here during the celebrations. These works in and around Sultanpur Lodhi Kapurthala shall be completed by 30.09.2019.

A Government Medical College and Super-Speciality Hospital will be established at Village Kotli Nangal in District Gurdaspur for Rs. 400 crore, in PPP mode (to be completed by 2021), and Sri Guru Nanak Devji Centre for Invention, Innovation, Incubation & Training (CIIIT) will be established as a Hub in Main Campus of PTU at Kapurthala, with a Spoke to be developed in Village Jabbowal, Sultanpur Lodhi (total Rs 739 crore).
A Guru Nanak Dev Ji Auditorium in PTU Kapurthala and a Bio-diversity Park and Village Kanjli, District Kapurthala are among the other projects announced by the Chief Minister. The Chief Minister said the railway station at Sultanpur Lodhi would also be upgraded, as announced by the Ministry of Railways, GoI, which had acceded to the state government’s request on the issue. He also welcomed the Centre’s decision to release commemorative coins and stamp to mark the commemoration. Vijay Kumar Dev to be next Delhi Chief Secretary