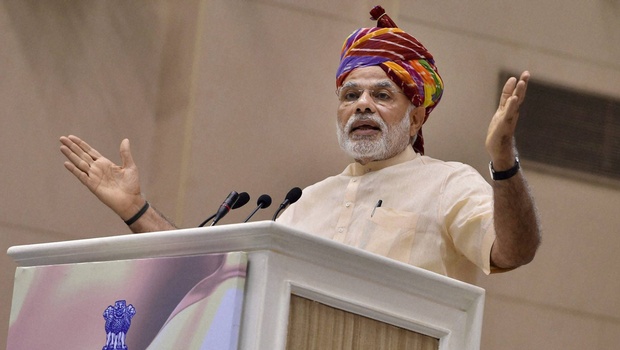 New Delhi, 15 Nov 2016 : Hitting out at Pakistan for the “origin and spread” of terrorism, Prime Minister Narendra Modi on Tuesday said India and Israel have agreed on the need for the global community to act with resolve against terror networks and states that harbour them.

Welcoming Israeli President Reuven Rivlin on his first-ever visit to India, Modi said both leaders agreed on the need to make the growing India-Israel defence partnership more broad-based through production and manufacturing partnerships.

“Our people are constantly threatened by forces of terrorism and extremism. We recognise that terrorism is a global challenge, knows no boundaries and has extensive links with other forms of organised crime. Regrettably, one of the countries of its origin and spread is in India’s neighbourhood,” said Modi.

“We agreed that the international community must act with resolve and determination against terror networks and states that harbour them. Failure to act and silence of speech only encourages the terrorists,” he said after holding talks with Rivlin.

He also expressed gratitude for Israel’s “clear support” to India’s candidature for a permanent seat in a reformed UN Security Council.

Harping on the mutual multi-dimensional and wide-ranging engagement, Modi said water management and conservation, and collaboration in scientific research and development have been identified as two areas of priority engagement between the two countries.

“We also prioritised practical and specific engagement such as in the cyber domain,” he said.

Observing that the current trajectory of the Indian economy offered promising opportunities for them, Modi said Israeli companies can scale up their tie-ups with flagship schemes of Make in India, Digital India, Skill India and Smart Cities.

“Indian and Israeli companies can also work together in high-technology manufacturing, and services sectors,” Modi said, and added that the mutual partnership can generate jobs and benefit both the geographies.

He also said that the growing number of Indian students, going to study in Israel and the vice versa, can be an important bridge in the bilateral partnership.

“Promoting people-to-people contacts, which has a long shared history, is our shared priority,” he said.

“Two and a half decades of our friendship has brought rich dividends for both our nations. It has also strengthened voices of peace, stability and democracy globally,” said Modi, pointing to the two countries celebrating 25 years of full diplomatic relations next year.

Say how you will deal with cash chaos: SC to government