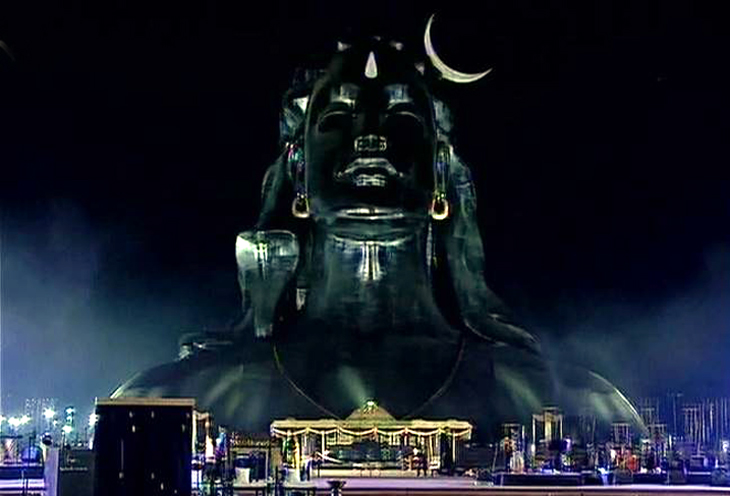 The bust of Lord Shiva has been installed at the premises of Isha Foundation and dedicated to its founder Sadhguru Jaggi Vasudev.

Addressing the gathering, PM Modi said, “’Maha Shivratri’ symbolises a union of divinity with a purpose of overcoming darkness and injustice”.

He also said, “India has given the gift of Yoga to the world and by practising Yoga, a spirit of oneness is created.” “Today whole world wants peace, not only from wars and conflicts but peace from stress, and for that we have Yoga.

“Rejecting an idea just because its ancient, can be potentially harmful,” Modi said.

A tight security was put in place for the PM’s visit which coincided with a planned protests by tribal groups and political parties.

They alleged that the idol has been built on encroached land. The Left parties had asked the PM to keep away from the venue. “This iconic face symbolises liberation, representing the 112 ways in which one can attain the ultimate through the science of yoga,” the Foundation had earlier said in a statement.

PM Modi, who inaugurated the statue at 6.30 pm, also lit a sacred fire to mark the start of ‘Maha Yoga Yagna’ across the world when one million people would take the oath to teach yoga to others.

“For the first time in the history of humanity, Adiyogi introduced the idea that the simple laws of nature are not permanent restrictions.

“If one is willing to strive, one can go beyond all limitations and attain liberation, moving humanity from assumed stagnation to conscious evolution,” Sadhguru Vasudev had said.

Jayalalithaa’s niece Deepa floats her forum, to contest from R.K.Nagar