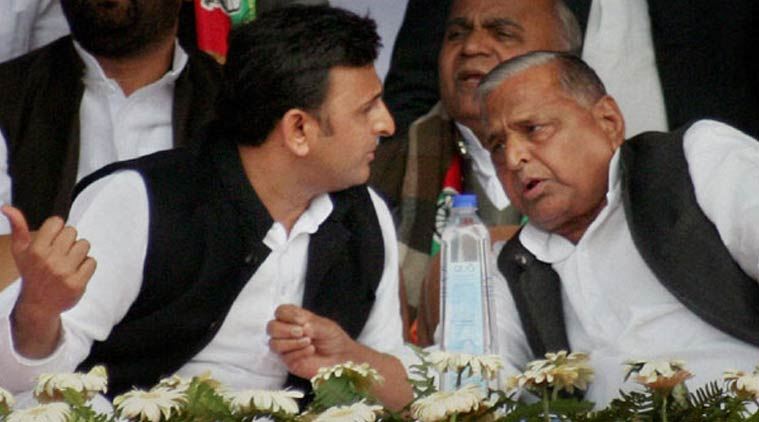 Lucknow, Oct 24 : Uttar Pradesh’s ruling Samajwadi Party was in turmoil on Monday as party supremo Mulayam Singh Yadav publicly pulled up his son and Chief Minister Akhilesh Yadav at a meeting which ended on a fiery note with sacked minister Shivpal Yadav calling Akhilesh a “liar”. The Shivpal and Akhilesh factions within the once united party came to blows ahead of the meeting called by Mulayam Singh, who made it clear that he would never let go either his brother Shivpal Yadav or long-time aide Amar Singh, who the Chief Minister intensely dislikes.

On two occasions during the marathon meeting attended by Samajwadi Party leaders, Mulayam Singh, 76, shouted his son down, once asking him to shut up and later asking “tumari haisiyat hi kya hai?” (Who the hell are you?)

The Monday meeting was a desperate attempt by Mulayam Singh to stamp his authority on the Samajwadi Party ahead of crucial assembly elections early next year but it could not do away with the bitterness within.

While defending Shivpal Yadav, who was sacked on Sunday from the cabinet by Akhilesh Yadav along with three other ministers, and Amar Singh, Mulayam Singh, however, made it clear that Akhilesh Yadav would stay put as the Chief Minister.

He also warned that if the party failed to overcome its cracks, the ugly unprecedented faction fighting would help the Bharatiya Janata Party (BJP) to return to power in the country’s most populous state.

As the meeting ended, Mulayam Singh shouted at MLC Ashu Malik, a Shivpal backer, for branding Akhilesh Yadav “an Aurangazeb”. Shivpal Yadav himself reportedly raised his voice: “Your Chief Minister is a liar.”

Earlier, in a choking voice, Akhilesh Yadav said his father was his “guru” and he would never split the Samajwadi Party. He said he was ready to quit if his father asked him — to end the turmoil in the party.

The 43-year-old, however, alleged a conspiracy against him and that Shivpal Yadav was a part of it.

Shivpal Yadav then launched a scathing attack on Akhilesh Yadav, accusing him of trying to form a new party or stitch an alliance with another party.

He alleged that officials refused to listen to him at the behest of the Chief Minister. “We have been beaten by police, have been to jail, pedalled cycles for hundreds of kilometers to bring the party to this situation,” he pointed out.

Mulayam Singh, who threw his lot behind his brother, the party’s new state unit chief, said he won’t even hear a word against him. “Nobdoy can become a big leader without having a big heart.”

Chiding his son for sacking Shivpal Yadav and for his diatribe against Amar Singh, Mulayam Singh said: “You all know nothing about Amar Singh. He saved me from going to prison.”

As Akhilesh Yadav rose to protest against the praise of Amar Singh, an angry Mulayam Singh asked him to shut up and sit down.

Mulayam Singh described Shivpal Yadav as a political veteran “who can make people win and lose elections”. He told Akhilesh Yadav to stop day dreaming that he alone can lead the party to victory.

Mulayam Singh then told Akhilesh Yadav to come and hug his uncle Shivpal Yadav and bury the hatchet.

Akhilesh Yadav reluctantly hugged him and even touched Shivpal Yadav’s feet. Soon after that Mulayam Singh announced that Akhilesh Yadav will not be removed as the Chief Minister.

BJP will usher in development in Uttar Pradesh, says Modi