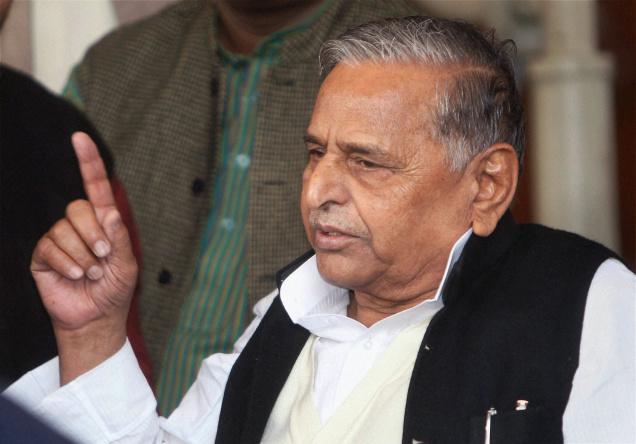 New Delhi, 9 Jan 2017 : Samajwadi Party patriarch Mulayam Singh Yadav on Monday said there were no differences between him and his son and Uttar Pradesh Chief Minister Akhilesh Yadav.

After meeting Chief Election Commissioner Nasim Zaidi, Mulayam Singh told the media, in an apparent reference to Ram Gopal Yadav, that “one person” was creating problems in the party.

“There are some who have influenced my son (Akhilesh). I had a talk with him last night and also in the morning with him over the issue. There is no dispute between my son and me.

“There is only a bit of dispute within the party, not much. Only one person is responsible for this. But that will be resolved soon,” he added.

Mulayam Singh, who is staking claim over the party symbol ‘cycle’, met Zaidi for nearly 40 minutes. He was accompanied by loyalists Amar Singh as well as brother Shivpal Yadav.

On Sunday, Mulayam Singh had said he remained the party President and that Akhilesh Yadav was just the Chief Minister.

The comment followed the Akhilesh faction’s decision of January 1 to replace Mulayam Singh with the Chief Minister as the Samajwadi Party head.

Since then, both factions of the party have petitioned the Election Commission to claim its symbol ‘cycle’ ahead of assembly elections in the state.

“We came to the Election Commission to urge them to a taken a decision on the party symbol as soon as possible because nominations (for the assembly polls) will start soon (January 17),” he told the media.

He refused a comment on Mulayam Singh’s insistence of not having any differences with Akhilesh Yadav.

“The Election Commission had directed that before filing the reply with them we should provide a copy to Mulayam Singh. I tried to give him a copy but he refused,” Upadhyay told the media.