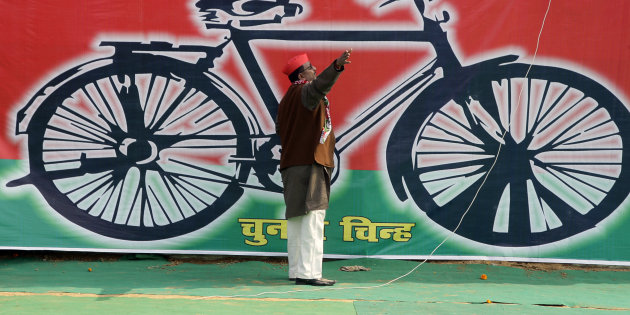 Ram Gopal Yadav later said: “We told the Election Commission that most party MPs, MLAs and MLCs are with Akhilesh. So the party led by him is the real Samajwadi Party and it should get the party symbol.”

According to informed sources, the Akhilesh faction showed videos of the national convention of Sunday in Lucknow with a large number of party workers electing the Chief Minister as the National Working President.

The Akhilesh faction on Sunday dislodged Mulayam Singh as the party president. The meeting was termed unconstitutional and illegal by Mulayam Singh.

Meanwhile, former Chief Election Commissioner B.B. Tandon told IANS: “The EC will take a view on the evidence produced and both the parties will be given a hearing.

“After that, the EC will take a final decision on allotting the symbol… It is quite likely the one of the factions will loose the symbol, it can be frozen and they will be asked to choose fresh symbols,” Tandon said.

With Uttar Pradesh elections expected to take place this year, it may end up in both factions getting fresh party names and symbols, a source said.

Meanwhile, party leader Azam Khan, who on Saturday brokered peace between the warring father and the son, arrived in New Delhi to meet Mulayam Singh, who apparently returned to Lucknow without meeting him.

“He came to Delhi to meet Mulayam and try to bring the warring factions to the discussion table. But Mulayam unfortunately left before he could meet him,” a party source said.