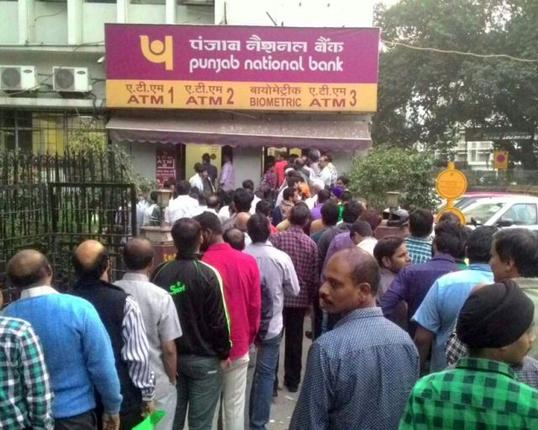 New Delhi, 18 Nov 2016 : People hustled in long queues outside banks and ATMs on Friday, struggling to get cash for their daily expenses on the ninth consecutive day since the government announced the spiking of high value currency notes.

People were seen standing outside banks and teller machines since early morning to get cash or deposit or exchange the now spiked currency notes.

People expressed frustration and disappointment over the long waits. And many of them were angry because their previous attempts had failed because many teller machines were non-functional, including the ones inside metro stations, as they ran out of cash or developed techinical glitches.

Prachi Agrawal, a resident of Mayur Vihar in east Delhi, said she supported the move aimed at to uproot black money and corruption. However, she was critical because “the government should have been more prepared with the availability of the new currency” notes.

She said the new bill of Rs 500 and 2,000 were still unavailable largely, which had caused a huge demand-supply gap after the older 500 and 1,000 rupee notes — which formed some 86 per cent of India’s currency in circulation — were scrapped.

An HCL employee waiting outside an Axis Bank ATM in a long winding queue said he had no option but to “keep waiting” for cash.

“I have been waiting here for the past two hours to withdraw some cash. I have only Rs 30 in my wallet.”

Shruti Solanki, an Ernst and Young employee, said: “I had exchanged the old currency of Rs 1,500 a week ago. That was all I had. After a week, today, I am left with nothing. There are so many expenses that I have to manage as I commute from Delhi to Gurugram every day for my office.”

Standing in an ATM queue in Lajpat Nagar, the 25-year-old said: “It has been two hours already. I don’t know how much more time it will take as there are still around 30 people waiting ahead of me.”

She was also critical of the government’s failure in making adequate arrangements before announcing the surprise move. “It is questionable. They could so easily take such a major step but had not formulated any strategy to deal with the consequences.”

A New Ashok Nagar resident in east Delhi said he can’t comment on how effective this measure would be to root out corruption in the country.

“My only concern is poverty, we are struggling with,” he said after withdrawing cash from an ICICI ATM.

“I came and stood outside the ATM at 8 a.m. and had to wait for four hours as cash arrived at 11 a.m. The other day I waited for two hours but could not withdraw anything as the machine ran out of cash.”

Cash-strapped Supriya Das, 44, was annoyed because she was finding it difficult to manage home and deal with the long queues, simultaneously.

“This kind of a situation was never even imagined in this country. Every single penny has become so significant. I am trying to make card payments wherever possible,” she said, outside an SBI bank ATM.

However, not every shop has the card payment option, she said.