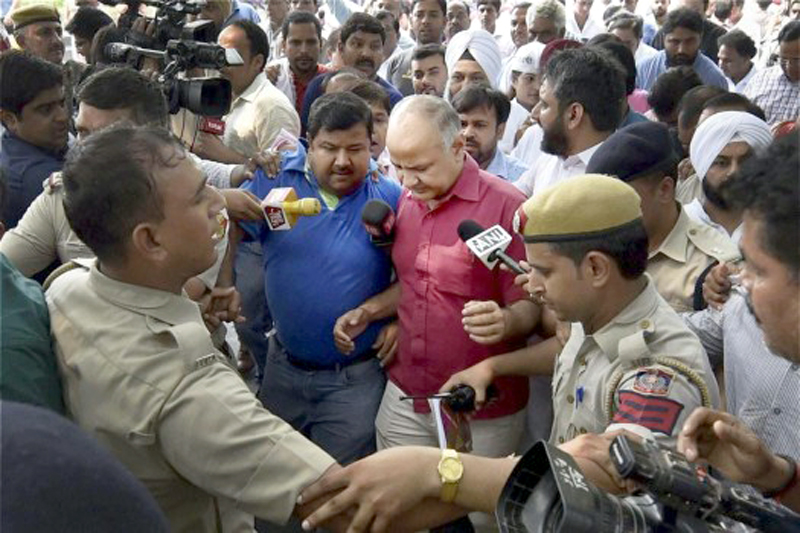 And police refused to let Chief Minister Arvind Kejriwal to meet ex-serviceman Ram Kishan Grewal’s family even as the dead man’s son alleged that he, his brother and brother-in-law were abused and beaten by police before being taken to a police station.

The Bharatiya Janata Party (BJP) accused Gandhi and Kejriwal of courting needless controversy. Kejriwal, however, remained outside the Lady Hardinge Hospital, insisting he won’t budge until he was allowed to meet Grewal’s family.

Grewal, 70, formerly of Rajputana Rifles, allegedly took poison at a park here on Tuesday evening and died demanding the immediate implementation of the One Rank One Pension (OROP) scheme.

Wednesday’s bedlam began when Sisodia went to the Ram Manohar Lohia Hospital (RML) and met the dead soldier’s family. As he came out, police took him away to the Parliament Street police station ignoring his protests. “I went to RML to meet the family, not to stage a dharna. What’s wrong with that?” an angry Sisodia tweeted and targeted Prime Minister Narendra Modi.

“Law and order is in jeopardy if Deputy Chief Minister meets the grieving family? What kind of system is this, Modiji?”

“I am the Chief Minister of Delhi. An ex-serviceman has committed suicide. Is it not my duty to meet his family?” Kejriwal asked after he too was blocked from entering the hospital.

By then, police had prevented Gandhi from entering the Ram Manohar Lohia Hospital. An upset Gandhi reacted: “This is an undemocratic mentality. A new kind of India is being created. It is Modiji’s India.”

Gandhi was then taken to the Mandir Marg police station where the dead soldier’s son, Jaswant, was also detained along with his family members.

“You have no shame?” Gandhi asked a police officer there and demanded to know how the police could even think of detaining the family of a retired soldier who had killed himself.

As hundreds of Congress activists massed outside the police station shouting slogans and waving Indian and Congress party flags, the police allowed Gandhi to leave, ending 70 minutes of unexplained detention.

Police claimed that Grewal’s family was detained because it was creating a ruckus. Sisodia was told by an officer that anyone can be detained for 23 hours without showing any documents.

At the same police station, a grim looking Jaswant, the dead man’s son, alleged that police abused and beat him, his younger brother as well as a brother-in-law at the hospital before taking them to the police station.

This, he said in a video message, had not happened to any ex-serviceman’s family. He demanded justice for his family.

As Defence Minister Manohar Parrikar sought details about the suicide, the Bharatiya Janata Party went on the offensive against Gandhi and Kejriwal.

“Saddened by the death of Ram Kishan Grewal. I express my heartfelt condolences. I have asked the officials to provide me details,” Parrikar tweeted.

In his suicide note, Grewal wrote that he was committing suicide as a “sacrifice” for the nation, a police official told IANS.

Former soldiers resumed a relay hunger strike on Tuesday for rectification of anomalies in the OROP scheme announced by the government.