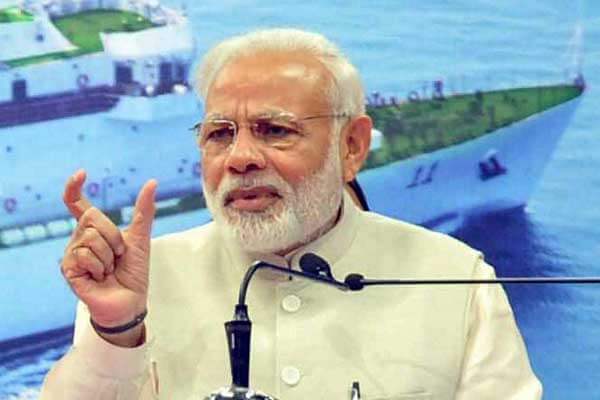 Ghazipur (Uttar Pradesh): Prime Minister Narendra Modi on Monday justified demonetisation of Rs 500 and Rs 1,000 currency and said as a result of the move, the poor were sleeping in ease and those who have stashed ill-gotten money are running from pillar to post, buying sleeping pills.

Addressing an impressive gathering at Ghazipur, the Prime Minister said had Uttar Pradesh not given such a huge mandate to the Bharatiya Janata Party (BJP), there could not have been a government at the Centre which “works with steely determination” for the people of the country.

Modi also said there was no dearth of money in the country but it was not there where it should be. He also asked the crowds to endorse demonetisation by raising their hands and clapping. When the crowd did so, he said his mandate was to clear the country of graft and weed out the corrupt and he was merely doing so.

The demonetisation move, he admitted, had caused problems to the people but added that they were braving it out for the larger good and progress of the nation.

He attacked the Congress and accused the party of “misleading” the people on demonetisation. He also mentioned how the Congress was now shedding crocodile tears though it had once clamped Emergency in the country for 19 months and converted the country into a “big prison”.

“It is surprising that people in Congress, their lawyer leaders are asking me under which law have I banned these currency notes, I want to ask them under which law did they ban the 25 paise,” the PM said, while adding how a person did something which befitted his or her stature. “You never went beyond 25 paise and we have done what was of our standing,” he said.

He also said the banning of big currency notes was a major step against counterfeit currency which was feeding terrorism and Maoism.

“I am trained to make ‘kadak’ (strong) tea since my childhood and I know poor people like this type of tea, while the rich feel its bitterness,” he said in reference to his beginning as a tea seller.

Modi said there were politicians who were wearing currency notes and now are trying to spread rumours among the people on demonetisation, and assured the people that days of graft were now over. “Do not pay heed to rumours, every single rupee earned honestly by you will always remain yours, till your brother is alive,” Modi said in an emotional tone.

Taking a dig at previous governments, Modi said that in a speech on November 14, 1962, the Lok Sabha MP from Ghazipur, Vishwanath Pratap had vividly and emotionally told then Prime Minister Jawaharlal Nehru about the backwardness of the region.

He also launched a full-scale attack on the Congress party as well the country’s first Prime Minister Jawaharlal Nehru for “not fulfilling the aspirations of the poor” in Uttar Pradesh, and promised to alleviate poverty and backwardness in the Purvanchal region of the state.

Referring to the Patel Commission constituted in 1962 by the then Nehru government to look into state of poverty in Purvanchal, in eastern Uttar Pradesh, Modi said the recommendations by the panel have remained locked in papers till today.

“The Patel committee had made recommendations essential for the development of the area. Nehru went away, many other PMs too came and went. But those recommendations remained in files. Nothing was done.”

“I am the ninth Prime Minister from UP, and I have intentionally chosen this day for my address, because on Nehru’s birthday, those who misled the country should know, that the recommendations that were made in 1962, have remained unfulfilled even in 2016,” Modi said addressing a rally here.

Assuring the people of developing the region, Modi said finishing the incomplete work was the greatest homage ever paid to Nehru on his birthday.

“Panditji (Nehru) you went away wrapping in papers, the aspirations and expectations of the poor. You went away, your party (Congress) keeps abusing me, your party leaders your family members bring false allegations on me, but still on your birthday, I vow to finish your incomplete work.

“Nobody has given you such a homage that an MP from UP is giving you,” said Modi who represent Varanasi in the Lok Sabha.

“In 1962 it was proposed to build a bridge on the Ganges here, government came and went, leaders addressed rallies, votes were collected but nothing was done to build the bridge,” said Modi who on the day unveiled several projects including a rail-cum-road bridge on Ganges on Mau-Tadighat rail road.