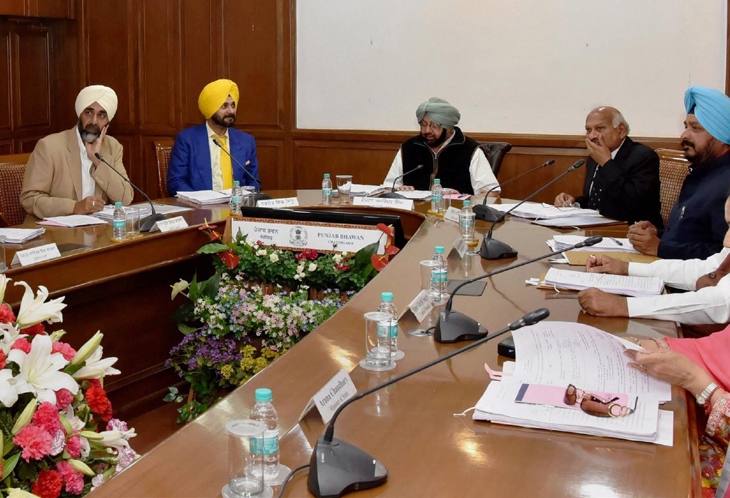 Chandigarh, 18 March 2017 : The new Punjab Cabinet in its maiden meeting here on Saturday announced reservation for women in jobs and urban and rural local bodies and an end to use of red beacons on official vehicles by the Chief Minister, ministers, legislators and officers.

There will also be no auction of land of farmers, who have availed of loans but have not paid back, by any bank, including cooperative ones. The state will also come up with a new transport policy.

“Punjab is the first state to give 33 per cent reservation for women in jobs, including contractual appointments, and 50 per cent reservation to them in Panchayati Raj institutions and urban local bodies,” Finance Minister Manpreet Singh Badal told the media after the meeting.

He said the Cabinet announced the setting up of a special Cabinet sub-committee to provide details on debt of farmers within 60 days to enable the Congress government to take further action.

Badal said the Chief Minister, ministers and legislators will no longer lay foundation stones of public projects and also not inaugurate them.

“Even for big projects of Rs 100 crore, Rs 200 crore or Rs 500 crore, the names of the Chief Minister and ministers will not be displayed (on the foundation or inauguration stones). It will carry only one line — the project has been executed with the money of the taxpayers,” Badal said.

He said liquor quota would be drastically reduced and liquor vends reduced by 400 to 500 initially.

“We want to reduce liquor consumption by 50 per cent in five years,” he said.

Promising to curb cartelisation and monopolisation of bus transport in Punjab, which was prevalent in the previous Shiromani Akali Dal-BJP government rule of 10 years, Badal said a new transport policy will be taken up at the next Cabinet meeting.

“We will reduce our expenses and increase our revenue. In five years, we will make Punjab a revenue-neutral state,” Badal, the estranged nephew of previous Chief Minister Parkash Singh Badal, said.

The Congress leader said the mafia rule which he claimed was encouraged in the previous regime will end.

“We will butcher the mafia operating in Punjab. No one in the mafia will be able to survive the state’s action,” Badal said.

The minister said all MLAs will submit lists of their property in the assembly on January 1 every year, including the Chief Minister and ministers.

“We will bring a strong Lokpal Bill in the assembly. This will be more comprehensive than the bill proposed by social activist Anna Hazare and his movement. This will include the Chief Minister, ministers and high officials,” the Finance Minister said.

Other decisions include scrapping of ‘halqa’ (area) in-charge system prevailing during the previous government’s rule, abolition of district transport office (DTO), fixed duty hours for police personnel, initiation of detailed police and governance reforms and setting up of degree colleges in every sub-division.

The Amarinder Singh-led Congress government assumed charge in Punjab on March 16 after the Congress swept the assembly polls on March 11, winning 77 of the 117 assembly seats.

Yogi Adityanath is the new Chief Minister of UP