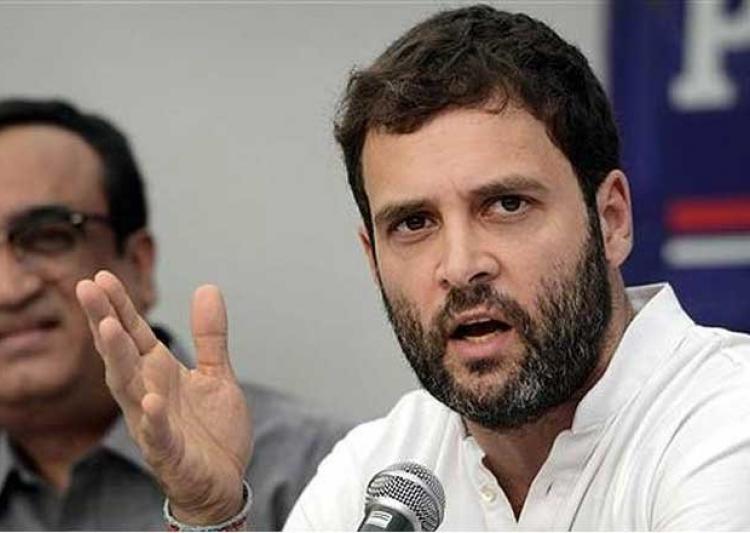 New Delhi, 16 Nov 2016 : Training his guns on Prime Minister Narendra Modi, Congress vice-president Rahul Gandhi on Wednesday demanded action against his friends and those who are hoarding black money.

Addressing a large group of Congress activists in Bhiwandi, he alleged that in the past couple of years, Modi has waived off over Rs 110,000 crore of loans to a handful of 15 industrialists, with whose help the country is being run.
“Now, through demonetisation, he has taken money from each citizens’ pockets to give it to these industrialists who are his friends no action has been taken against them we demand action against Modi’s friends and those who have hoarded black money,” Gandhi said.
He predicted that the money collected from the public after demonetisation of Rs 500 and 1000 currency notes, would go back to the pockets of those 15-20 industrialists and others “within one year”.

After securing bail in a defamation case filed by the RSS, an upbeat Rahul Gandhi stopped at an ATM at Vakola to talk to the people in the line on his way to the Mumbai airport, 20 km away.

The 46-year-old leader stopped at the ATM on the eighth day of the chaos over withdrawing money following the government’s controversial demonetisation drive.

On Friday last week, Rahul had visited a State Bank of India ATM at Parliament Street in central Delhi “to withdraw Rs 4000” and “express solidarity” with the common people, who he claimed were suffering following the November 8 announcement.

Rahul said he was trying to understand the problems of the people standing in the line. He spoke to senior citizens and women, who claimed they were standing for several hours.

Speaking exclusively to India Today, Rahul said the decision was taken in an “absolutely unplanned manner”.

“The ground reality is very bad. I appeal to the state government that they make some arrangements to help people who are struggling to withdraw cash,” he added

Printing details of currency notes is a secret matter: Minister