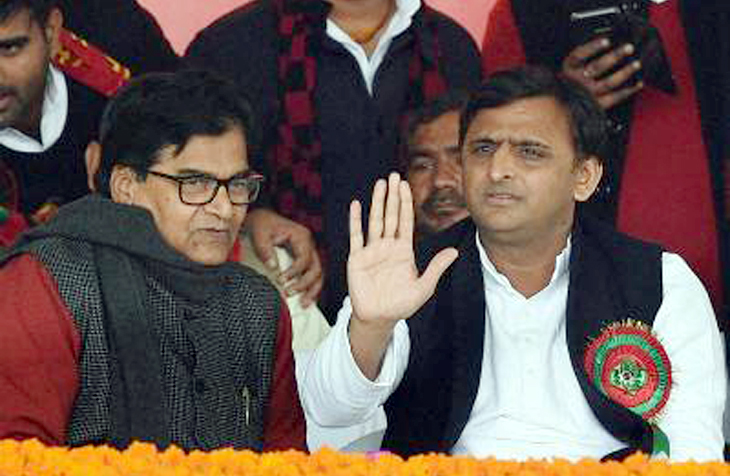 Party sources said the leaders of the Akhilesh camp  led by his uncle Ram Gopal Yadav and including Surendra Nagar and Sunil Sajan  submitted an affidavit regarding the SP leaders supporting the faction.

However, the number of signatories to the affidavit submitted to the poll panel was not known.

The sources said both factions  led by Samajwadi Party patriarch Mulayam Singh Yadav and his son Akhilesh Yadav  will now contest the state assembly polls on different party symbols, irrespective of who gets the official party symbol cycle.

The assembly elections in the most populous and politically significant state in India will be held in seven phases between February 11 and March 8.

It was not to be so, and by evening, it emerged that the chances of a rapprochement were over, the sources said.

The sources privy to the confabulations  that while both Shivpal and Mulayam Singh’s aide Amar Singh told the party chief that they were “ready to be the sacrificial lambs” if it brought the warring father-son together, the truce offer was turned down by Mulayam himself.

Mulayam Singh, the sources said, stressed on his stand that Akhilesh Yadav first step down as the SP National President, after which his demand for a larger say in ticket distribution will be considered.

The Akhilesh camp declined the offer. The Chief Minister wanted a “three-month free hand to win the polls” and then back off in favour of his father.

Meanwhile, Mulayam has once again written to the Election Commission to claim the ‘cycle’ poll symbol and sent some documents along with relevant parts of the party constitution to buttress his case. In a related development, Rajya Sabha member Ram Gopal Yadav, who is mentoring the Akhilesh Yadav camp, has sent sworn affidavits of some 5,761 Samajwadi Party leaders, including MLAs and MPs, to the Election Commission.

A copy of the same was sent to Mulayam Singh’s residence in Delhi but the staff there refused to accept it, the sources said.

By late evening, Amar Singh left for New Delhi. Mulayam Singh and Shivpal Yadav are set to join him on Sunday as they prepare to put up their case before the poll panel on Monday, the deadline set for taking views of both the factions before the EC takes a call on the claim to the party symbol.

There is also a likelihood of a freeze on the poll symbol by the Election Commission.