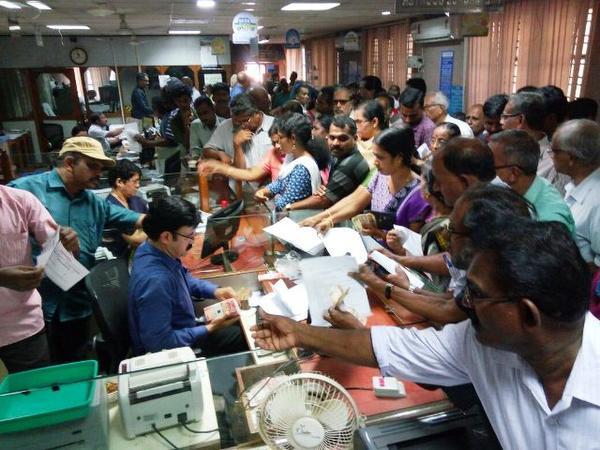 New Delhi, 21 Dec 2016 : In a U-turn, the RBI on Wednesday withdrew its order barring people with KYC-compliant bank accounts from depositing over Rs 5,000 in old currency more than once until December 30.

But the notification stands for bank accounts which are non-KYC. The upper limit of Rs 50,000 also stays for non-KYC bank accounts, the Reserve Bank of India said.

The central bank said that on reviewing its December 19 notification, it was advising banks to withdraw the one-time deposit condition for amounts above Rs 5,000 for fully KYC-compliant accounts.

On December 19, the RBI had announced that deposits of demonetised Rs 500 and Rs 1,000 notes in excess of Rs 5,000 will be allowed only once till December 30 — that too after strict scrutiny.

The decision created massive confusion even after Finance Minister Arun Jaitley contradicted on Monday night the RBI notification, saying people will not be questioned if any amount of old currency was deposited at one go. But repeated deposits may invite scrutiny, he said.

Both the opposition and bank customers hit out at the government’s flip-flop over deposit of old notes following the November 8 decision to recall the high-value currency bills.

According to the December 19 notification, if a person deposits more than Rs 5,000 in withdrawn currencies, the account will be credited only after questioning him or her, in the presence of two bank officials, as to why the money was not deposited earlier. The bankers were to keep the explanatory statement on record for future audit trail.

Even if the deposits were less than Rs 5,000 at a time but cumulatively exceeds the amount, then also the bank officials were told to get on record an explanation from the depositor.

Officials said the curbs were meant to encourage deposits of the demonetised currency under the Taxation and Investment Regime for the Pradhan Mantri Garib Kalyan Yojana, 2016.

The Finance Ministry had also said earlier that the decision was meant to end the seemingly unending queues in banks.

Confusion over RBI circular: Are multiple deposits allowed till Dec 30?