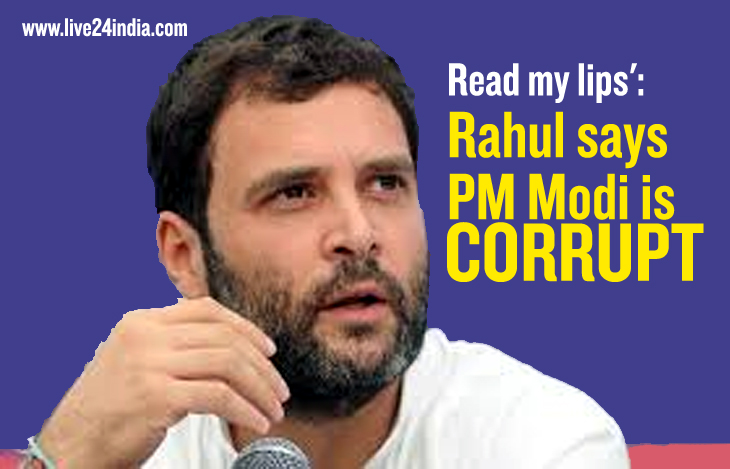 Though the Prime Minister and his office didn’t react to the remarks, the government dismissed the “baseless allegations” as a “sign of desperation” by the Congress.

Gandhi didn’t make the proof public. He insisted he wanted to explode the bombshell in the Lok Sabha during the ongoing winter session that has been almost completely washed away in opposition protests against the government’s November 8 move to ban Rs 500 and Rs 1,000 notes to combat corruption and black money.

“Read my lips. The Prime Minister is personally terrified with the information that I have. I have information on the personal corruption of the Prime Minister,” Gandhi told reporters after the Lok Sabha was adjourned for the day without conducting any business — the way it has been since the session began on November 16. The session ends on this Friday.

“If I speak, his (Modi’s) balloon will burst. He is scared. The government is scared of the information I have. Thus, they (the government) are not allowing me to speak in Parliament. Let us speak in the Lok Sabha. We will reveal everything.”

The Gandhi scion also dubbed demonetisation as Modi’s “personal decision … taken against the poor of the country (that) has destroyed millions of lives”.

Gandhi last week said an “earthquake will come” if he was allowed to speak in the Lok Sabha “about the biggest scam committed by Narendra Modi single handedly”.

The BJP fielded an array of its leaders to counter the allegations.

Kumar was referring to a sting operation by a news channel showing some politicians, including those from the Congress, being involved in money laundering.

“Gandhi is making baseless allegations. He should instead apologise to the nation,” said Kumar, accusing the opposition of “sabotaging” the entire winter session of Parliament.

He said that if the Congress had information to share with Parliament, Gandhi “could have done it” when the House was in session.

“They have been unmasked, so they are making these allegations.”

BJP spokesperson G.V.L. Narasimha Rao said “Rahul Gandhi is making a joke of himself” every time he speaks.

Urban Development Minister M. Venkaiah Naidu questioned why the Congress was “not allowing the House to function and have a proper debate on the demonetisation issue”. He said the government was ready to debate demonetisation in the House provided the opposition allows it to run.

Amid the allegations and counter-allegations, Parliament again faced disruptions on Wednesday as the Lok Sabha and Rajya Sabha convened after an extended weekend.

HC judges not exempted from security checks at airports: SC