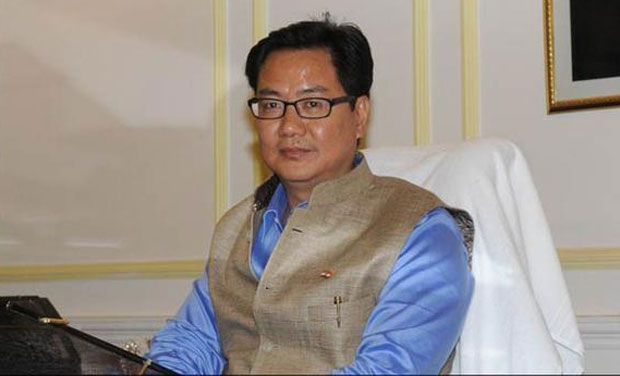 New Delhi, 27 Feb 2017 : Minister of State for Home Kiren Rijiju on Monday wondered who was “polluting” the mind of a Delhi University student whose campaign on social media against the ABVP over the Ramjas College violence has gone viral. The Minister’s tweet attracted opposition flak.

Gurmehar Kaur, a student of Lady Shri Ram College and daughter of an army officer killed in the Kargil war, launched a social media campaign against the ABVP after last week’s violence in Ramjas College. Opposition parties Congress and Aam Aadmi Party (AAP) slammed the ruling BJP over the issue.

Kaur posted a photo on social media, holding a placard saying: “I am a student of Delhi University. I am not afraid of ABVP. I am not alone. Every student of India is with me” with the hashtag #studentsagainstabvp. She received a lot of hate messages and also rape and life threats on social media by some who called her “anti-national”.

In response to Kaur’s campaign, the Minister of State for Home on Monday said: “Who’s polluting this young girl’s mind?” The Minister added in the same tweet: “A strong Arm Force prevents a war. India never attacked anyone but a weak India was always invaded.”

Congress took on the Minister, and called ruling Bharatiya Janata Party ‘patriarchal’. “When a woman thinks independently, patriarchal BJP thinks her mind is polluted. When a person ‘bats’ for peace, BJP responds with hate,” the Congress said in a tweet from its official account.

The Aam Aadmi Party (AAP) slammed the BJP for not condemning those issuing “rape threats” on social media to the student. “A girl is being threatened by rape on social media. Not a single BJP (Bharatiya Janata Party) or RSS (Rashtriya Swayamsewak Sangh) leader called it wrong or condemned it. Why,” AAP leader Ashutosh tweeted.

Delhi Chief Minister Arvind Kejriwal had on Sunday night attacked the BJP over the issue and said it had now become a party of “hooligans” and “criminals”. Sharing a video of Kaur speaking about the “graphically detailed” rape threat she received, Kejriwal tweeted: “Just listen to this. This is BJP. They will destroy our country. Everyone must rise against their goondaism.”

“Threatening our daughters and sisters with rape; is this BJP’s patriotism? Shame on these people,” he added. One of the posters that Kaur posted on social media read “Pakistan did not kill my Dad, war did.” Cricketer Virendra Sehwag took a dig at this and tweeted a pic saying: “I did not score two triple centuries, my bat did.”

Clashes took place at Delhi University’s Ramjas college on February 22 after the Akhil Bharatiya Vidyarthi Parishad (ABVP) members forced the cancellation of a seminar to be addressed by JNU student Umar Khalid, and then disrupted a march. Khalid was jailed last year on sedition charges for allegedly shouting anti-national slogans.