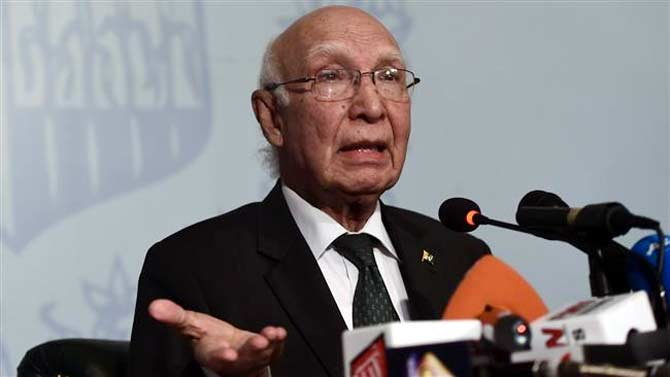 Islamabad, 08 Dec 2016 : Pakistan on Wednesday confirmed that it does not have enough or conclusive evidence against Kulbhushan Yadav, who has been labeled an Indian spy by Islamabad.

Advisor to Prime Minister Nawaz Sharif on Foreign Affairs, Sartaj Aziz, told a full chamber of the Pakistan Senate that the PML-N government has been presented with insufficient evidence that Yadav was an agent of India’s external intelligence agency, the Research And Analysis Wing (RAW).

“What the dossier contained was not enough. Now, it is up to the concerned authorities how long they take to give us more matter on the agent,” Aziz said.

Kulbhushan Yadav was arrested by the Pakistan authorities during a raid in Balochistan in March this year.

According to the Pakistan government, Yadav has admitted that he had been directing various activities in Karachi and Balochistan at the behest of RAW since 2013. He also confessed of playing a role in deteriorating law and order situation in Karachi.

The Indian government, on the other hand, has issued at least five to six note verbales to the Pakistan foreign ministry to get consular access to Yadav, but Islamabad has till now showed no signs of allowing it.

Pakistan has claimed that Yadav is a commander-rank officer with the Indian Navy, while India maintains that he retired from the Navy in 2002 and has had nothing to do with the Indian government when he was arrested from Balochistan.

India has denied that Yadav is a spy and maintains that he is a businessman.

Month after demonetisation: Noida woman faints in queue for cash

Demonetisation is a scam worth Rs 8 lakh crore: Kejriwal