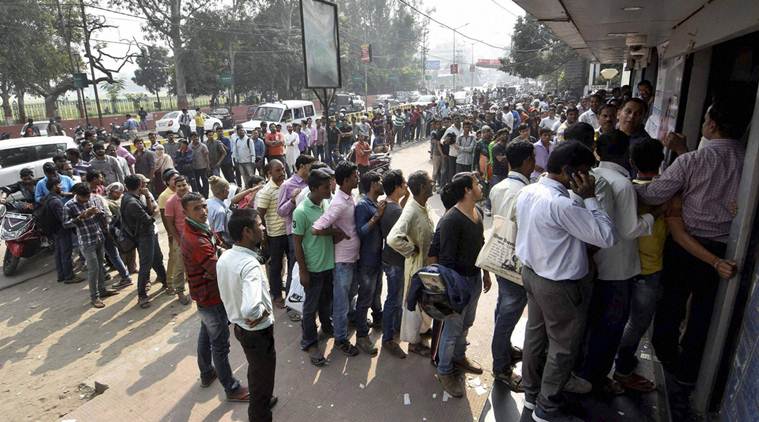 New Delhi, 15 Nov 2016 : Long queues were seen outside all banks and ATMs in the state capital and in much of the country’s most populous state for a sixth straight day. Although banks were shut on Monday, ATMs were operational.

There was no end to the serpentine queues at Hazratganj, Aminabad, Aliganj, Niralanagar, Chinhat and Indiranagar here. Many of those in the queues were, surprisingly, women and youths.

Sohail, a mechanic with an aluminium fitting shop, said he was having huge difficulties due to the demonetisation of 500 and 1,000 rupee notes.

“I am facing difficulty to even arrange meals for my family. Where do I go?” he despaired.

Belonging to a poor family from Faizabad, also in Uttar Pradesh, he said he had not sent any money to his ageing parents for days.

Amitabh, owner of Kavita Glass House, complained that the “market has sunk” and Prime Minister Narendra Modi’s November 8 announcement had rendered a death knell to small businessmen like him.

“While earlier I used to do brisk business, things have come to a grinding halt now,” Amitabh.

Many say they have not been able to take out their own money from their bank accounts because the cash reserves were constantly running out before they reach the teller.

Anil Agarwal, who runs a grocery shop at Indiranagar, said his son and wife had queued up since morning at an ATM and so had his shop staff but none of them had been able to get any cash.

He lamented the fall in business in the near absence of cash with people.

Gesturing towards his shop, he said it was bustling with activity till a few days ago but was now deserted.

“I am not sure of the demonetisation’s good affects in the long term, but in the short term we have been ruined.”

Shadaab, a milk vendor, has a similar story. Milk sales have plummeted in the past few days, he said.

“Ours is retail business and also a perishable item. So it is a double whammy for us.”

He said he went to a bank on Saturday hoping to get some 100 rupee notes. But he was given a Rs 2,000 note, which has only added to his woes because no one is accepting it.

Ashu, a roadside seller of footwear outside Aurobindo Park in Lucknow, said his family has gone without proper meals as there was no income.

“We used to make a few hundred rupees every day but now with no customers, it is a black week for us,” Sunny.

An eminent book seller here who did not wish to be named is also in dire straits.

“It is a scary scenario… The business is finished. My overheads are going up and the future is uncertain,” he said.

Agarawal, a cloth merchant and an unabashed BJP supporter, is also not amused at the demonetisation rollout.

“We are with the government on the decision but look at what chaos they have created,” he said, standing outside a bank near Munshi Puliya.

There are reports of people getting restless at some ATM’s in western Uttar Pradesh due to non-availability of cash.

Bank officials said new currency 500 and 2,000 rupee notes are coming in fast. Recalibration of ATMs was on to allow the machines dispense new currency.

Till then, however, people seem to have been left to test their good luck. And most are finding themselves unlucky.

Say how you will deal with cash chaos: SC to government