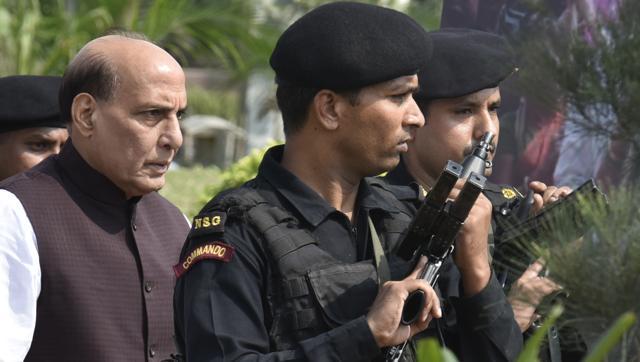 Home Minister Rajnath Singh on Monday said the Indian Army is giving a “befitting reply” to the terrorists as well as to continuous ceasefire violations along the Line of Control (LoC).

“Our soldiers and army are giving a befitting reply,” Singh said in reaction to Sunday night’s attack on a Border Security Force (BSF) camp in Baramulla town of Jammu and Kashmir, as well as continuous ceasefire violations along the Line of Control.
Militants attacked a camp of the counter-insurgency 46 Rashtriya Rifles (RR) in Janbazpora area of Baramulla on Sunday night. One BSF trooper was killed and another injured in exchange of fire during the attack.

Rajnath Singh made the remarks after reaching Leh on his two-day visit to Ladakh as part of the central government’s efforts to bring normalcy in Jammu and Kashmir.

The visit comes as tension escalated along the Line of Control and the Indian Army conducted surgical strikes at seven terror launch pads on September 29 in Pakistan-occupied Kashmir (PoK).

Singh also said that he will meet the delegation from Leh and Ladakh people and listen to their problems. “I will try to resolve their problems,” Singh added.