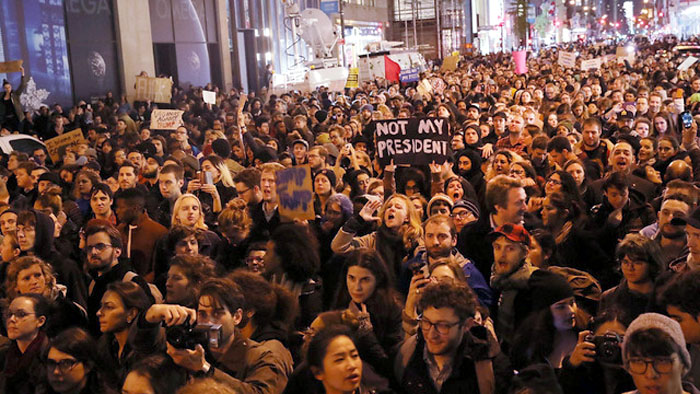 New York, 10 Nov 2016 : Thousands of demonstrators took to the streets in cities across the US on Wednesday night in a bid to protest against Republican Donald Trump’s victory in the presidential election. In cities from Boston to Los Angeles, the demonstrators chanted anti-Donald Trump slogans, with many yelling “not my president, not today”, CNN reported. As many as 5,000 people were at a protest in New York, the police estimated. Among the issues were immigration and Obamacare. “I came out here to let go of a lot of fear that was sparked as soon as I saw the results,” protester Nick Powers said. He said he feared the real-estate mogul will support stronger stop-and-frisk policies that would put many people in prison. He was worried that Trump’s victory would embolden sexist views. Many of the protests were in cities with large Democratic bases — Atlanta, Austin, Boston, Chicago, Denver, Philadelphia, Portland, San Francisco, Seattle and Washington, CNN noted. In Chicago, people walked down a normally busy Lakeshore Drive, carrying signs. Protesters in Austin, Texas, blocked a highway while students burned a flag on the campus of American University in Washington. In downtown Los Angeles, high school students crowded the steps of City Hall on Wednesday afternoon. Protester Brooklyn White was holding a sign that said “Hate won’t win”. The 18-year-old voted for Democratic nominee Hillary Clinton and was disappointed. At Berkeley High School in California, about 1,500 students walked out of classes on Wednesday morning. In des Moines, Iowa, hundreds of high school students who left class to protest of election results. In Phoenix, about 200 students from Carl Hayden High School marched to the state Capitol in protest. A candlelight vigil for Clinton supporters in front of the White House on Wednesday evening drew those who wanted to mourn their election loss. Early Wednesday morning after the votes were counted, one member of the crowd near the White House held an upside-down American flag, alongside the LGBT rainbow flag, in silent protest, CNN added. Setback for Punjab as SC strikes down law axing water-sharing