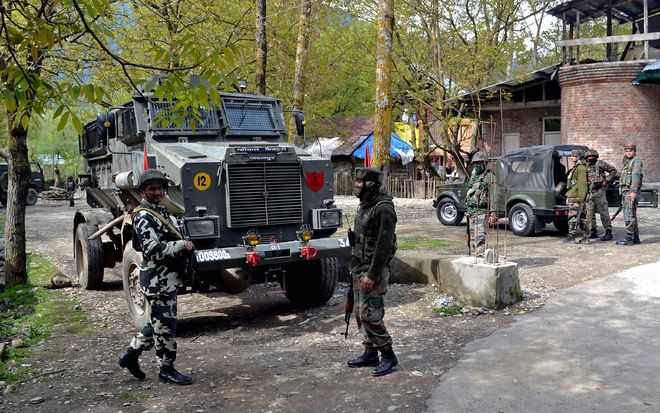 Srinagar, 8 Dec 2016 : Three Lashkar-e-Taiba (LeT) militants were killed on Thursday after a six-hour gunfight with security forces in Kashmir, triggering widespread protests across the south of the valley.

Mobile phone and internet services were suspended in parts of south Kashmir to prevent rumours and details of the counter-insurgency operation through social media.

Police said the slain militants were all Kashmiris and apparently belonged to south Kashmir.

“Three local militants of LeT have been killed. But a search operation is still going on,” a police officer said.

As news of the killings spread, clashes erupted between security forces and protesters who tried to march towards the gunfight site in Arwani village of Anantnag, some 40 km south of here.

Clashes between stone-pelting protesters and security forces also erupted at various other places in south Kashmir.

Lashkar-e-Taiba commander Abu Dujana, one of the most wanted militants in the state, was earlier rumoured to be among the gunmen holed up in a house where the militants were holed up.

There were conflicting reports about Dujana. Locals said he escaped from the hideout in Arwani which lies close to Chief Minister Mehbooba Mufti’s ancestral Bijbehara town.

But security officials neither confirmed nor denied if he was among the militants trapped since Wednesday night.

Police said security forces surrounded the village late on Wednesday following a tip off about the presence of militants inside the hideout.

“As security forces tightened the cordon, some gunshots were heard. But after that there was no exchange of fire,” the officer said.

He said the gunfight intensified in the morning after militants started firing at the security forces.

Mobile phone and internet services were suspended in south Kashmir Anantnag district as the gunfight raged.

Although authorities did not formally confirm that the mobile phone operations were suspended, but authoritative sources told the action had been taken to check spread of rumours in the area.