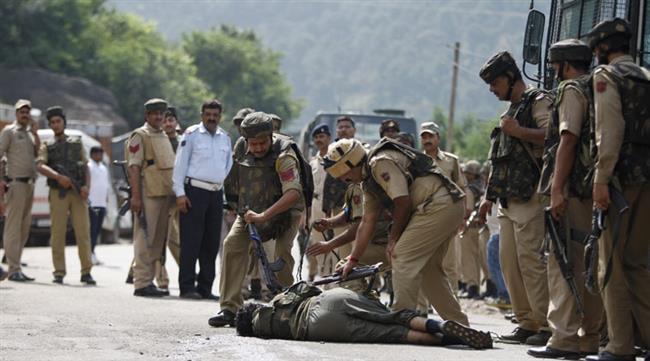 The attacks at the army base and a BSF camp – both on the outskirts of Jammu city – were the latest in a series of militant violence that has escalated after the September 29 surgical strikes at terror launch pads by the Indian Army in Pakistan-administered Kashmir.

Police sources told here that an unknown number of militants barged into the military camp at Nagrota town, near the headquarters of the Indian Army’s 16 Corps — a military formation that acts as a nerve centre to fight militancy and defend the borders in Jammu region.

A police officer said the militants carrying automatic weapons and explosives entered the field regiment camp around 5.30 a.m. They started firing indiscriminately at the Officers’ Mess inside.

“Three soldiers and two militants were believed to have been killed and three army men were injured. The exchange of fire is still on as other militants are still holed up inside,” the police officer said. Nagrota is located some 15 km from Jammu.

The dead soldiers included Major Kunal Gossain of 166 Medium Regiment Artillery, the officer said. The body of one of the slain gunmen was recovered even as the fighting was still raging.

However, military spokesperson Lt. Col Manish Mehta refused to divulge details of the attack or the casualties.

“We will not confirm any casualty till the operation is over,” Mehta told, adding that heavy exchange of fire was still on.

The Jammu-Srinagar highway, which runs through Nagrota, has been closed for traffic near the town after the security forces cordoned off the area.

As soldiers battled the militants in Nagrota, another gunfight raged in Samba, some 40 km south of here.

A police officer said security forces engaged a group of infiltrators from Pakistan in a shootout near the International Border.

Three militants were killed in the heavy exchange of fire during which an ammunition dump caught flames and exploded, critically injuring at least six border policemen, including an officer of the Deputy Inspector General (DIG) rank, B.S. Kasana.

The six, including Special Operation Group Inspector Sarabjit Singh, were taken to a hospital here, a police officer said, adding their condition was serious.

The violence on Tuesday followed days of calm on the border and the Line of Control (LoC) between Indian and Pakistani forces.

The two sides have been exchanging heavy mortar and artillery fire for months after the September 18 killing of 19 Indian soldiers in an attack on a military base in the border town of Uri in Kashmir.

Following the Uri attack, the Indian Army destroyed at least seven terror launch pads and killed an unknown number of terrorists and their sympathisers across the LoC in Pakistani Kashmir.

Since then, militants have attacked security forces in at least a dozen strikes in Jammu and Kashmir.