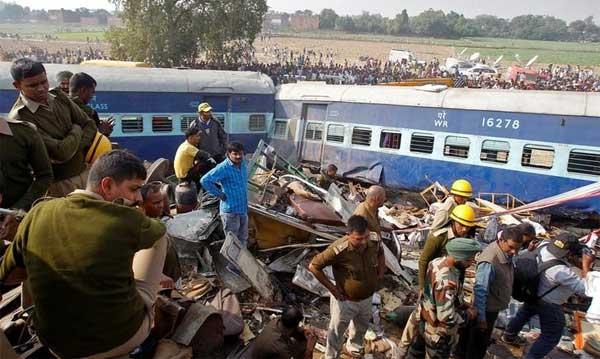 New Delhi, 21 Nov 2016 : The death toll in one of the worst rail accidents in the country that took place on Sunday when the Indore-Patna Express rolled off the tracks near Kanpur, rose to 142 on Monday, officials said.

“The death toll has risen to 142 and 59 people are still admitted in the hospital,” UP Police Inspector General Zaki Ahmed told.

Over 150 people were injured in the tragedy when 14 coaches of the train ran off the rails near Pukhrayan station, about 60 km from Kanpur city.

Railway Minister Suresh Prabhu on Sunday night visited the hospitals where the injured were being treated.

“High-level orders are being given to probe the accident,” Prabhu said, adding the Railway Ministry has collaborated with the Uttar Pradesh government to provide all necessary help.

Minister of State for Railways Manoj Sinha was also there at the accident site. He ordered officials to increase the pace of relief operations and better treatment to the injured.

“Strict actions will be taken against those responsible for the disaster,” Sinha added.

While the cause of the derailment is yet to be ascertained, Sinha had earlier said that the accident could have been caused due to rail fracture.

This was the worst train accident in the country after the May 2010 disaster in West Bengal involving Gyaneshwari Express in which some 170 people were killed.