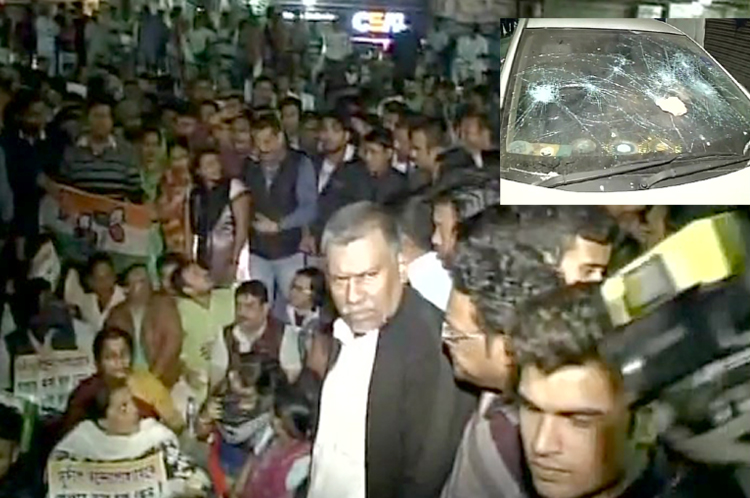 The Rapid Action Force has been deployed to control the situation, the city police said.

As the news of the MP’s arrest spread, hundreds of Trinamool activists took to the street.

Traffic had to be diverted from the Central Avenue in the heart of the city, close to the BJP headquarters in Muralidhar Sen Lane, due to the resulting chaos, the police said.

The Trinamool supporters shouted slogans and blocked the entrances of the BJP office. A few BJP workers bled from the head as they spoke to the media.

Some cars parked in the alley leading to the office were vandalised and stones were pelted at the building.

The police said no one has been arrested yet in connection with the violence.

The BJP workers present in the party office during the alleged attack said the assault was “pre-planned and unprovoked”.

“We were sitting inside the party office when some Trinamool goons attacked our party office and hurled bricks at us without any provocation. Around 15 of our party workers got injured in the incident,” a BJP worker claimed.

State BJP heavy-weights strongly condemned the attack, saying: “Trinamool Congress is becoming violent after the arrest of their leaders in serious corruption charges.”

“This attack was expected. The Trinamool Congress has become scared after the arrest of their Lok Sabha leader and is resorting to violence. This shows who is doing ‘vendetta politics’ in the country,” BJP state President Dilip Ghosh said.