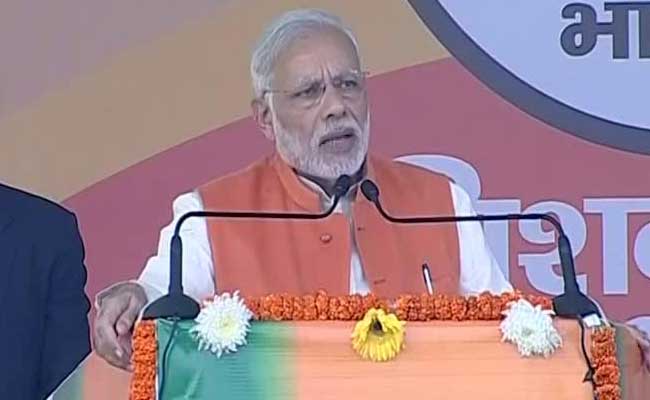 Moradabad, 3 Dec 2016 : Prime Minister Narendra Modi on Saturday said he “will find a way” to jail the rich who had after demonetisation stashed their ill-gotten wealth in Jan Dhan bank accounts of the poor — and let the poor retain the money.

Defending the decision to spike 500 and 1,000 rupee notes, Modi acknowledged the inconvenience caused to people by the November 8 move but said it would end all problems, including poverty, corruption and black money, in India.

Addressing a rally here in poll-bound Uttar Pradesh, Modi said the decision had rattled those who hoarded large quantities of black money and the rich were now queuing up in front of the houses of the poor, pleading with them to get the wealth deposited in their Jan Dhan accounts.

“Whoever has deposited the money in your accounts, don’t withdraw a rupee from it. See how they will plead and fall at your feet. If they threaten you tell them, ‘I will write a letter to Modi’,” he said.

“If you promise you won’t withdraw the money or return it to them, I promise I will find a way to send these people to jail and you can retain the money.”

The Prime Minister took a dig at his political opponents who have denounced the surprise decision to recall nearly 86 per cent of currency in circulation that has caused an unprecedented cash crunch in India. He said hardship of standing in queues for cash after demonetisation was unavoidable.

Modi said previous governments had made India stand in queues for everything. “We had to stand in queue to buy sugar, to buy kerosene, to buy wheat. Thanks to those who ruled (earlier) this country was being wasted away in queues.

“What I have done is start a queue to end all other queues.”

The Prime Minister emphasised that he won’t let the hardships of the people go waste and urged them to start getting cashless and use their mobile phones as their wallets.

“You don’t need to withdraw money from ATMs. You can buy what you want from the money in your account using your phones.”

He said his main aim was to fight corruption and get back the black money people have hidden and lamented that he was being criticised for doing this.

“I am surprised that in my own country some people are accusing me. Is it a sin that those who were looting the country were now being made accountable?”

He said he had no vested interest. “I am a fakir (hermit). I will pack my bags and leave.”

The Prime Minister said poverty needed to be eradicated from big states if India was to progress.