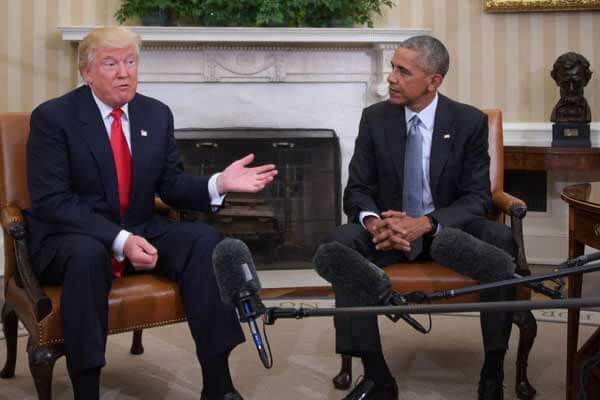 Washington, 11 Nov 2016 : US President-elect Donald Trump said it was a “great honour” to meet President Barack Obama, as the two met for transition talks at the White House, media reports said.

“So Mr. President, it was a great honour being with you, and I look forward to being with you many, many more times in the future,” Washington Post quoted Trump as saying on Thursday.

“We discussed a lot of different situations, some wonderful and some difficulties. I very much look forward to dealing with the president in the future, including counsel,” he added.

After the roughly 90-minute meeting, Obama said: “I want to emphasize to you, Mr. President-elect, that we now are going to want to do everything we can to help you succeed because if you succeed, then the country succeeds.”

A day after his shock victory in the US presidential elections, Trump’s first visit to Washington as the President-elect began around 10.30 a.m. as he landed at the Reagan National Airport on a private jet.

The president-elect was accompanied by his wife, Melania, who had a meeting with First Lady Michelle Obama.

Trump later met with House Speaker Paul Ryan at the Capitol and said they also would work together “to lower taxes” and “to fix health care and make it affordable and better”.

Senate Majority Leader Mitch McConnell joined Trump and his entourage on a walking tour through part of the Capitol building.

Trump and Obama had frequently attacked each other for years, but in the aftermath of the election results where Trump beat Democrat nominee Hillary Clinton, Obama acknowledged Trump’s victory, and stressed on ensuring a peaceful transition of power.