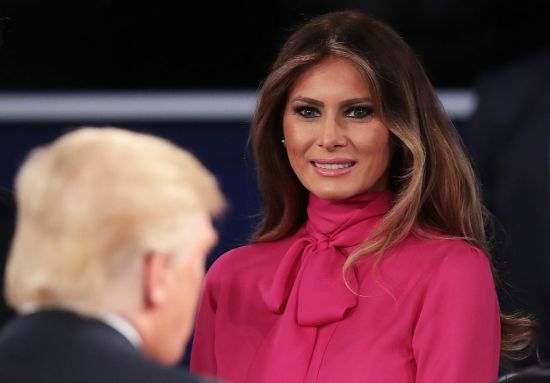 New York, Oct 18 : Melania Trump defended husband Donald Trump in her first interview since the Republican presidential nominee faced allegations of sexual misconduct, calling those accusations “lies”. She said Trump was “egged on” into “boy talk” during a 2005 tape in which he made lewd comments about women.

“I believe my husband…This was all organised from the opposition. And with the details… did they ever check the background of these women? They don’t have any facts,” Melania said in a CNN interview on Monday night She also said she never heard her husband use that kind of language before.

“No, that’s why I was surprised, because I said like I don’t know that person that would talk that way, and that he would say that kind of stuff in private,” Melania said.

“I heard many different stuff — boys talk,” she said, adding “The boys, the way they talk when they grow up and they want to sometimes show each other, ‘Oh, this and that’ and talking about the girls. But yes, I was surprised, of course.”

This was the first public defence Melania has made of her husband since the tape in which Trump bragged about sexually aggressive behaviour toward women was published by The Washington Post and NBC. In the wake of that report, several women have accused Trump of sexual misconduct.

Melania said her husband was “egged on” in the tape in which he made lewd comments about his own sexually aggressive behaviour toward women — remarks she says were “boy talk”.

“I said to my husband that, you know, the language was inappropriate. It’s not acceptable. And I was surprised, because that is not the man that I know,” she said.

“And as you can see from the tape, the cameras were not on — it was only a mic. And I wonder if they even knew that the mic was on,” she said, referring to the Manhattan billionaire and NBC’s “Access Hollywood” host Billy Bush.

Melania defended her husband’s criticism on the campaign trail of his accusers’ looks — an implication that the women who have alleged his misconduct were not attractive enough to sexually assault.

“He’s raw. He will say it as he feels it. So you know, I know he respects women. But he’s defending himself because they’re lies,” she said.

She also backed the Republican nominee’s claims that the election is being rigged in Hillary Clinton’s favour, arguing that media bias is undercutting her husband.

While concluding the interview, Melania made it clear she that she did not want sympathy.

“I’m very strong. And people — they don’t really know me. People think and talk about me like, ‘Oh, Melania, oh poor Melania’,” she said.

“Don’t feel sorry for me. I can handle everything,” she added.