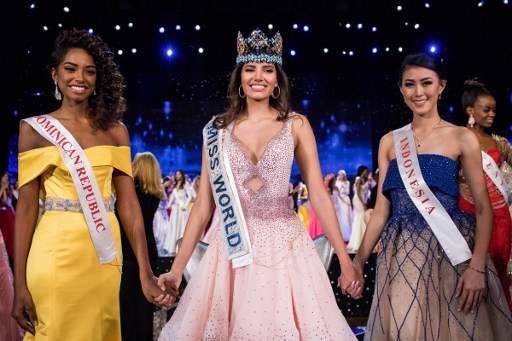 Maryland (US), 19 Dec 2016  : Stephanie Del Valle from Puerto Rico was crowned Miss World 2016 here, with representatives from Dominican Republic and Indonesia the runners-up. India’s Priyadarshini Chatterjee only made it to the top 20.

Miss World 2015 Mireia Lalaguna Royo crowned the 19-year-old Stephanie, the second Puerto Rican to hold the title after Wilnelia Merced won it in 1975, at the event’s grand finale held at the MGM National Harbor here on Sunday. The winner was ecstatic as she sat down to be crowned.

The event was aired live on Zee Cafe.

Del Valle, is a student who speaks Spanish, English and French, and hopes to get into the entertainment industry, reports telegraph.co.uk.

Crowned by Miss World 2015 Mireia Lalaguna of Spain, Del Valle called it an “honor and a great responsibility” to represent her Caribbean homeland.

Stephanie pipped the other top four finalists from Kenya, Indonesia, Dominican Republic and Philippines to win the title.

Indian contestant Priyadarshini lost out on the title after making it to the top 20 at the pageant. She featured in the top five contestants for the Beauty With a Purpose title, which was eventually won by Miss Indonesia.

A Delhi-based girl from Guwahati, Priyadarshini was the first candidate from the northeastern region at the Miss World pageant. All of 20, she is a student of sociology.

She was happy to “represent a civilisation as old as time itself, the land of myriad cultures, traditions, languages and religions” at the gala, she had said in her introduction video for the contest.

This was the 66th edition of the gala, which put the contestants through a series of challenges and interviews to determine who will win the coveted title of Miss World 2016 and become the ambassador of the motto ‘Beauty with a purpose’. The Miss World pageant, created in Britain by Eric Morley in 1951, is the oldest surviving major international beauty contest. It is one of the three most publicised beauty contests in the world, alongside the Miss Universe and Miss Earth contests.

Living up to the national stereotype, the first two titleholders were both Swedish. Since then a further 34 nationalities have been victorious, with Britain (five), India (five), the US (three), Jamaica (three), Iceland (three), Germany (two) and Australia (two) all providing multiple winners.

Canada’s Miss World representative, Chinese-born Anastasia Lin was embroiled in a controversy when pageant officials reportedly warned her against speaking to the press for three weeks about human rights abuses in China. She was given the green light again on Wednesday.

Last year, China blocked Lin from attending the same contest when it was held in the city of Sanya.