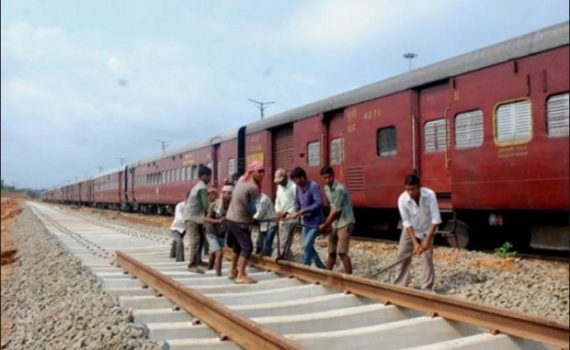 Senior officials of India and Bangladesh held a review meeting here to speed up work on the Rs 973 crore project between the two neighbours.

“The Bangladesh government recently started the land acquisition process. On the Indian side, the same would begin in December,” Ajit Vinayak Gupte, Joint Secretary in the Indian External Affairs Ministry, told media after the meeting with Bangladesh officials. “Unless requisite lands are not acquired, the other vital works cannot begin. By 2018, the new railway project would be functional.”

According to the official, 123.5 acres of land, including 56.5 acres in India, will be acquired to execute the project to facilitate carriage of goods to and from both countries.

The eight-member Bangladesh team was headed by Shashi Kumar Singha, Additional Secretary in the Railway Ministry.

Later, officials from both the countries met Tripura Transport Minister Manik Dey to discuss the project, which was finalised in January 2010 when Bangladesh Prime Minister Sheikh Hasina met then Indian Prime Minister Manmohan Singh during her visit to New Delhi.

The project, which was sanctioned in the 2012-13 railway budget, would be part of the Trans-Asian Railway network and provide a much shorter connectivity from northeastern states to Kolkata via Bangladesh.

The Indian government would bear the entire expenditure of the project, which was also figured in Prime Minister Narendra Modi’s meeting with Hasina during his visit to Dhaka in June last year.

“Following the Tripura government’s persistent persuasion and intervention by the Prime Minister’s Office, the DoNER Ministry agreed to provide Rs 580 crore for the Tripura part of the Agartala-Akhaura project,” Dey told IANS.

He said the Agartala-Akhaura railway project would provide a major boost to development and economy of northeastern India and eastern Bangladesh.

“The External Affairs Ministry would provide necessary funds for the Bangladeshi part of the project,” he said.

The 1,613-km mountainous distance between Agartala and Kolkata via Guwahati-New Jalpaiguri-Kishanganj (Bihar)-Malda would be reduced to 514-km once the rail track is linked through Bangladesh.

The existing railway line from Guwahati passes through Lumding in Nagaon district (in central Assam) and southern Assam connecting Agartala and parts of Manipur and Mizoram with the rest of the country.

According to railway officials, after India’s independence, Agartala was the first state capital in the country to come up on the rail map in October 2008.